All LG solar panels we carry can withstand a maximum load of 5400 Pa. Mono X modules are known for being durable, yet light in weight. The unique frame design allows liquid to drain, even at low slopes and angles. These state-of-the-art LG solar panels are manufactured with 25 years of in-depth R&D and more than half century of consumer electronics. This research lead to the development of the attractive black NeON solar cell for the Mono-X solar panel. The NeON R solar panel incorporates a multi-ribbon bus technology to replace the flat electrode bus for added efficiency. The modernized NeON R solar cell design allows LG to offer an enhanced 25 year product and performance warranty for NeON R solar panels. 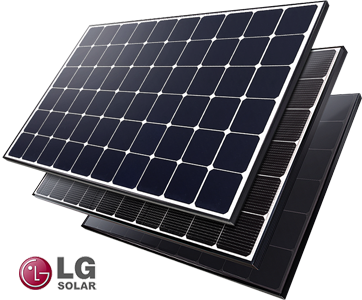 LG embarked on a solar energy source research program in 1985. This research leading to modern LG solar panel technology was supported by LG Group's rich experience in the semi-conductor, LCD, chemistry and materials industry. LG released the first Mono X series solar panels to the market in 2010. LG Mono X solar panels were exported to 32 countries in the following 2 years thereafter. In 2013, LG NeON (previously known as Mono X NeON) won the "Intersolar Award", which proved LG is the leader of innovation in the industry. With the LG NeON R series, many significant refinements have been made to the cell structure to be able to provide some of the most efficient, reliable and easy to install solar panels on the photovoltaic market today.

LG developed the core standard specifications for a solar module and became an official test laboratory certified by TÜV Rheinland and Underwriters Laboratories. Please refer to details on our corresponding solar panel product pages for more details on certifications and warranty information.

In January 2009 LG was able to buy the domain name, LG.com, placing it among the companies who own their two letter brand's domain name.

In 1994 GoldStar gained sponsorship from The 3DO Company to make the first 3DO Interactive Multiplayer. In 1995, GoldStar was renamed LG Electronics, and acquired Zenith Electronics of the United States. LG Solar Energy is a subsidiary formed in 2007 to allow LG Chem to supply polysilicon to LG Electronics for production of solar cells to manufacture solar panels. In 2008, LG took its first dive into the solar-panel manufacturing pool, as it announced a preliminary deal to form a joint venture with Conergy. Under the deal, set to be completed by year's end, LG would acquire a 75 percent stake in Conergy's Frankfurt solar-panel plant for LG solar panels.