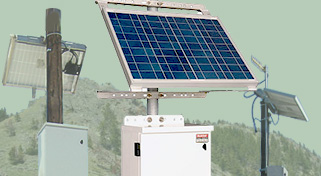 Morningstar's TriStar™ 45 (TS-45) is a three-function controller that provides reliable solar battery charging, load control or diversion regulation. The controller operates in one of these modes at a time and two or more controllers may be used to provide multiple functions.

The TriStar 45 uses advanced technology and automated production to provide exciting new features at a competitive cost. The optional TriStar meter is the most sophisticated and informative controller meter on the market. The controller is UL listed and is designed for both solar home systems and professional applications.

More Power
Ratings to 45A at 48VDC will handle solar arrays up to 3kW. 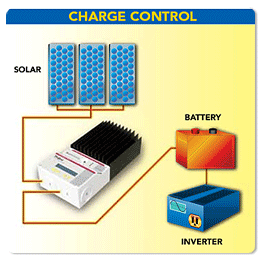 The Morningstar TriStar-45 Charge Controller accepts up to 45A at 12V, 24V or 48V DC solar array input.

Rated at up to 45 amps, it will function at a wide voltage range of 12-48 volts. Multiple TS-45 charge controllers can be run in parallel for larger solar arrays up to 200 amps or more. Options include an optional meter, remote meter and remote temperature sensor.

The Morningstar TriStar 45 Charge Controller is capable of handling solar arrays up to 3kW!

All of Morningstar’s TriStar charge controllers are warranted to be free from defects in material and workmanship for a period of FIVE (5) years from the date of shipment to the original end user. Morningstar will, at its option, repair or replace any such defective products.

Pulse Width Modulation (PWM) is the most effective means to achieve constant voltage battery charging by switching the solar system controller’s power devices. When in PWM regulation, the current from the solar array tapers according to the battery’s condition and recharging needs.

Why is there so much excitement about PWM?
Charging a battery with a solar system is a unique and difficult challenge. In the "old days", simple on-off regulators were used to limit battery outgassing when a solar panel produced excess energy. However, as solar systems matured it became clear how much these simple devices interfered with the charging process.

The history for on-off regulators has been early battery failures, increasing load disconnects, and growing user dissatisfaction. PWM has recently surfaced as the first significant advance in solar battery charging.

PWM solar chargers use technology similar to other modern high quality battery chargers. When a battery voltage reaches the regulation setpoint, the PWM algorithm slowly reduces the charging current to avoid heating and gassing of the battery, yet the charging continues to return the maximum amount of energy to the battery in the shortest time. The result is a higher charging efficiency, rapid recharging, and a healthy battery at full capacity.

In addition, this new method of solar battery charging with the Morningstar Tri Star Charge Controller promises some very interesting and unique benefits from the PWM pulsing. These include:

The benefits of the TriStar PWM technology are discussed in more detail in the following addendum:

How does PWM technology help me?
The benefits noted above are technology driven. The more important question is how the PWM technology benefits the solar system user. Jumping from a 1970’s technology into the new millennium offers:

Are all of these benefits tested and proven?
A great deal of testing and data supports the benefits of PWM. More information is attached that describes the technology and various studies. Morningstar will continue our ongoing test programs to refine the PWM charging technology. Over time, each of these benefits will be improved and more clearly defined with numbers and graphs.

Are all PWM chargers the same?
Buyer beware! Many solar charge controllers that simply switch FETs differently than the on-off algorithm claim to be a PWM charger. Only a few controllers are actually using a Pulse Width Modulated (PWM) constant voltage charging algorithm. The rest are switching FETs with various algorithms that are cheaper and less effective. Morningstar was awarded a patent in 1997 for a highly effective battery charging algorithm based on true PWM switching and constant voltage charging. The Morningstar TriStar uses this patented algorithm.

1. Ability to recover lost battery capacity
According to the Battery Council International, 84% of all lead acid-battery failures are due to sulfation. Sulfation is even more of a problem in solar systems, since "opportunity charging" differs significantly from traditional battery charging. The extended periods of undercharging common to solar systems causes grid corrosion, and the battery’s positive plates become coated with sulfate crystals.

Morningstar’s PWM pulse charging can deter the formation of sulfate deposits, help overcome the resistive barrier on the surface of the grids, and punch through the corrosion at the interface. In addition to improving charge acceptance and efficiency, there is strong evidence that this particular charging can recover capacity that has been "lost" in a solar battery over time. Some research results are summarized here.

A 1994 paper by CSIRO, a leading battery research group in Australia (reference 1), notes that pulsed-current charging (similar to Morningstar controllers) "has the ability to recover the capacity of cycled cells." The sulfate crystallization process is slowed, and the inner corrosion layer becomes thinner and is divided into islands. The electrical resistance is reduced and capacity is improved. The paper’s conclusion is that pulse charging a cycled battery "can evoke a recovery in battery capacity."

Another paper, a Sandia National Labs study summarizes testing of a VRLA battery that had "permanently" lost over 20% of its capacity. Conventional constant voltage charging could not recover the lost capacity. Then the battery was charged with a Morningstar charge controller, and "much of the battery capacity has been recovered."

Finally, Morningstar has been testing for capacity recovery. An attached graph  shows how a battery that was "dead" recovered much of its lost capacity after extended charging with a Morningstar charge controller. After the test was set-up, for 30 days the solar lighting system produced virtually no lighting since the system went directly into LVD each night. The battery was very old and about to be recycled. Then, the load began to turn on longer each night as shown on the graph. For the next 3 months the battery capacity steadily increased. This test and other capacity recovery tests are ongoing at Morningstar.

Solar PV systems have a history of problems due to poor battery charge acceptance. For example, a study of four National Forest Service lighting systems (reference 4) using on-off shunt controllers clearly demonstrated the problems caused by low charge acceptance. The batteries remained at low charge states and went into LVD every night, but the battery typically accepted only about one-half the available solar energy the next day during charging. One system only accepted 10% of the energy available from the array between 11:00 AM and 3:00 PM!

After extensive study, it was determined that "the problem is in control strategy, not in the battery." Further, "the battery was capable of accepting that charge, but it wasn’t being charged." Later a system "similar in all respects" except using a constant voltage charge controller was studied. In this case, the "battery is being maintained in an excellent state of charge."

A number of tests and studies have demonstrated that Morningstar’s PWM algorithm provides superior battery charge acceptance. An attached graph (reference 5, attached) compares the recharging ability of a Morningstar PWM controller with a leading on-off regulator. This study, done by Morningstar, is a side-by-side test with identical test conditions. The PWM controller put 20% to 30% more of the energy generated by the solar array into the battery than the on-off regulator.

3. The TriStar Charge Controller maintains high average battery capacities
A high battery state-of-charge (SOC) is important for battery health and for maintaining the reserve storage capacity so critical for solar system reliability. An FSEC Test Report (reference 6) noted that "the life of a lead-acid battery is proportional to the average state-of-charge," and that a battery maintained above 90% SOC "can provide two or three times more charge/discharge cycles than a battery allowed to reach 50% SOC before recharging."

However, as noted in the previous section, many solar controllers interfere with the recharging of the battery. The FSEC study noted at the end of the report that the "most significant conclusion is that some controllers did not maintain the battery SOC at a high level, even when loads were disconnected."

In addition, a comprehensive 23 month study of SOC factors was reported by Sandia in 1994. It was learned that the regulation setpoint has little effect on long-term SOC levels, but the reconnect voltage is strongly correlated to SOC. Five on-off regulators and two quasi constant voltage regulators were tested (Morningstar controllers were not developed when this test started). A summary of the SOC results follows:

Sandia concluded that the number of times a system cycles off and on during a day in regulation has a much stronger impact on battery state-of-charge than other factors within any one cycle. Morningstar’s PWM will "cycle" in regulation 300 times per second.

It would be expected that batteries charged with the Morningstar’s PWM algorithm used by the TriStar charge controller will maintain a very high average battery state-of-charge in a typical solar system. In addition to providing a greater reserve capacity for the system, the life of the battery will be significantly increased according to many reports and studies.

4. The Morningstar TriStar Charge Controller equalizes drifting battery cells
Individual battery cells may increasingly vary in charge resistance over time. An uneven acceptance of charge can lead to significant capacity deterioration in weaker cells. Equalization is a process to overcome such unbalanced cells.

More testing will be done to study the potential benefits is this area.

5. Reduce battery heating and gassing
The ionic transport in the battery electrolyte is more efficient with PWM. After a charge pulse, some areas at the plates become nearly depleted of ions, whereas other areas are at a surplus. During the off-time between charge pulses, the ionic diffusion continues to equalize the concentration for the next charge pulse.

In addition, because the pulse is so short, there is less time for a gas bubble to build up. The gassing is even less likely to occur with the down pulse, since this pulse apparently helps to break up the precursor to a gas bubble which is likely a cluster of ions.

6. Automatically adjust for battery aging
As batteries cycle and get older, they become more resistant to recharging. This is primarily due to the sulfate crystals that make the plates less conductive and slow the electro-chemical conversion.

However, age does not affect PWM constant voltage charging.

The PWM constant voltage charging will always adjust in regulation to the battery’s needs. The battery will optimize the current tapering according to its internal resistance, recharging needs, and age. The only net effect of age with PWM charging is that gassing may begin earlier.

7. Self-regulate for voltage drops and temperature effects
With PWM constant voltage charging, the critical finishing charge will taper per the equation:

This provides a self-regulating final charge that follows the general shape of this equation.

As such, external system factors such as voltage drops in the system wires will not distort the critical final charging stage. The voltage drop with tapered charging current will be small fractions of a volt. In contrast, an on-off regulator will turn on full current with the full voltage drop throughout the recharging cycle (one reason for the very poor charge efficiency common to on-off regulators).

Because Morningstar TriStar charge controllers are all series designs, the FET switches are mostly off during the final charging stages. This minimizes heating effects from the controller, such as when they are placed inside enclosures. In contrast, the shunt designs will reach maximum heating in the final charging stage since the shunt FETs are switching almost fully on.

In summary, the PWM constant voltage series charge controller will provide the recharging current according to what the battery needs and takes from the controller. This is in contrast to simple on-off regulators that impose an external control of the recharging process which is generally not responsive to the battery’s particular needs.